Problems with Conventional Zoning by Land Use

Conventional (Euclidean) zoning regulates primarily by land use, dividing neighborhoods into single-family residential, multifamily residential, commercial, office, etc. This separation of uses creates the opposite of mixed-use walkable neighborhoods. Along with use, conventional zones typically rely on numeric values, such as floor area ratio (FAR) and density, which results in unpredictability and creates all sorts of barriers to Missing Middle Housing.

Missing Middle Housing (MMH) are multi-unit, house-scale buildings intended to be part of low-rise residential neighborhoods. However, these types of neighborhoods are often zoned as single-family residential disallowing multi-family buildings, thus preventing Missing Middle types from being built. Yet, there are numerous examples across the U.S. where, for example, a house-scale fourplex fits in nicely with single-family detached houses. Why? Because it’s the same size and footprint as a typical single-family home. 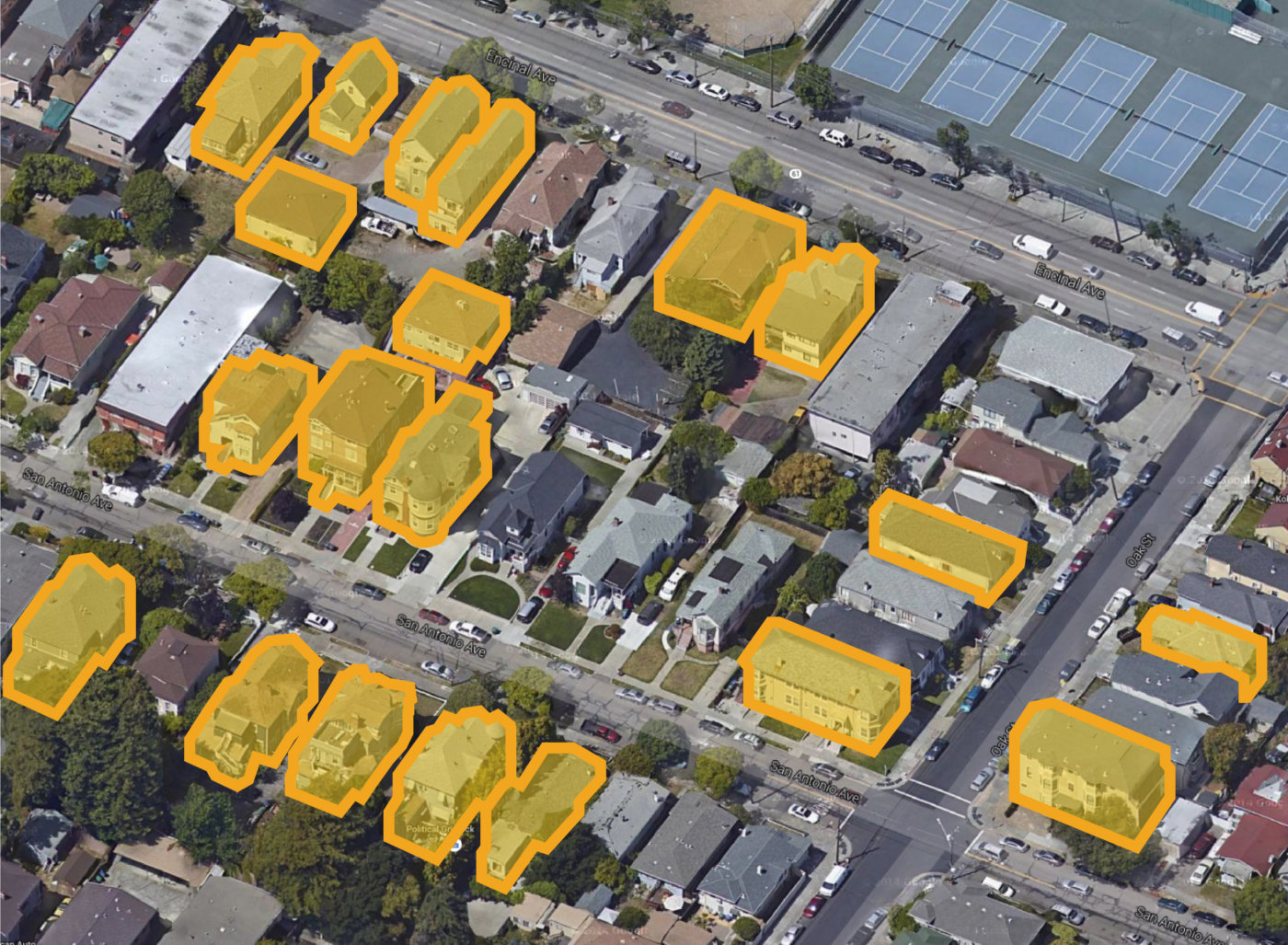 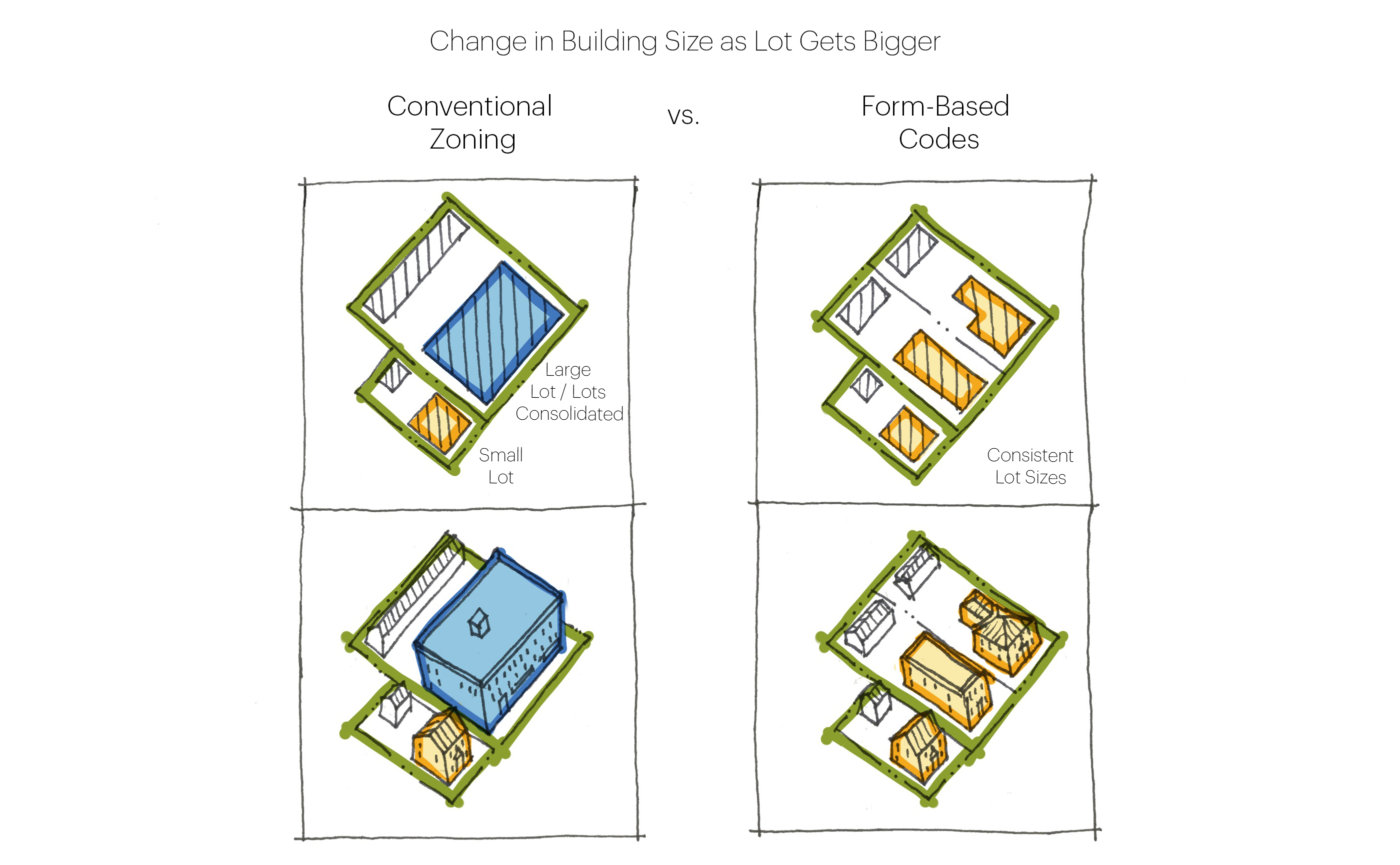 Another reality that we’ve found is that most communities regulate housing projects with the residential density tool. In addition to this tool not being clear about what form the buildings might take, density-based zoning doesn’t work with the “blended densities” found in neighborhoods where Missing Middle Housing (MMH) thrives. MMH buildings are similar in form and scale to detached single-family homes. But because they include from 2 to 12 units on a lot, MMH buildings often vary dramatically in their densities compared to houses. This makes it either illegal to build them in many zones, and complicated to regulate with a density-based system.

For example, consider a cottage court that can have net densities from 14 to 21 units per acre (or more with alley-loaded lots), even though the buildings are only one story tall, and each cottage is only 25 feet by 30 feet (slightly bigger than a 2-car garage). This low-intensity, house-scale multi-family type is an excellent way of adding housing while blending in with single-family homes. However, this type would not be allowed in many conventional single-family residential zones (since it has multiple units) and may also not be allowed in conventional multi-family zones that operates on density standards.

For instance, if a multi-family zone allows a maximum density of 35 dwelling units per acre with few form standards, builders/developers will tend to max out the lot with a large, out-of-scale apartment building, rather than building the cottage court that the neighborhood would prefer. This is because, typically, an investor will tend to use every allowed unit and not leave money on the table. It’s just common sense and human nature.

Another issue with density-based zoning is that tends to treat all units the same regardless of size. This means that a 3,500-square-foot unit is considered the same as a 600-square-foot unit for calculations such as density, parking and open space. The lack of recognizing these differences in size discourages much-needed, smaller units. For example, using conventional zoning, a fourplex with four, 600 sf units would require four times the parking and open space as a 2,400 sf detached single-family home, even though the amount of building area is the same. This presents confusion and barriers, typically making the fourplex unfeasible to fit on a typical lot. Density is a useful tool for many purposes, but not for accurately predicting built form. In the example above, both building types have similar densities (29 du/ac for the five-flex on the left, 30 du/ac for the 60-unit apartment building on the right). However, both are completely different in form, scale, and relationship to the public realm.

Conventional or Euclidean zoning has inadvertently created a number of barriers to enable the design and delivery of Missing Middle Housing. Some of the key issues are: The diagrams above illustrate the impact of parking requirements on developable area. In the image on the left, a 40’ by 60’ fourplex is feasible, assuming a parking standard of one space per unit. For the same lot, if the parking requirement is increased to two spaces per unit as shown on the right, the building footprint shrinks to 40’ by 39’, making a fourplex unviable.

FBCs represent a paradigm shift in the way that we regulate the built environment, using physical form rather than a separation of uses as the organizing principal, to create predictable, built results and a high-quality public realm.

The form-based approach starts with a Community Character Analysis of the community’s existing patterns of development and built form, climate, and other considerations. Looking at the existing patterns and desired future built form, a range of form-based zones are created. For each form-based zone, a specific range of housing types are allowed, that would allow the neighborhood or community to evolve while ensuring compatibility with existing buildings. For example, in a walkable residential neighborhood, allowed building types may include single-family detached homes, cottage courts, and side-by-side duplexes. In a more urban walkable neighborhood, cottage courts, side-by-side duplexes, stacked duplexes, fourplexes, and small multiplexes may be allowed.

In addition, for each building type, a Form-Based Code typically provides supplemental form standards that are calibrated to ensure good urbanism and prevent overbuilding in terms of height and bulk. For example, a cottage court typically allows for 6 to 8 units, but also specifies form standards such as a maximum height of 1 to 1.5 stories, a maximum building footprint/unit size of around 800 square feet and a minimum size for the shared courtyard or green space. 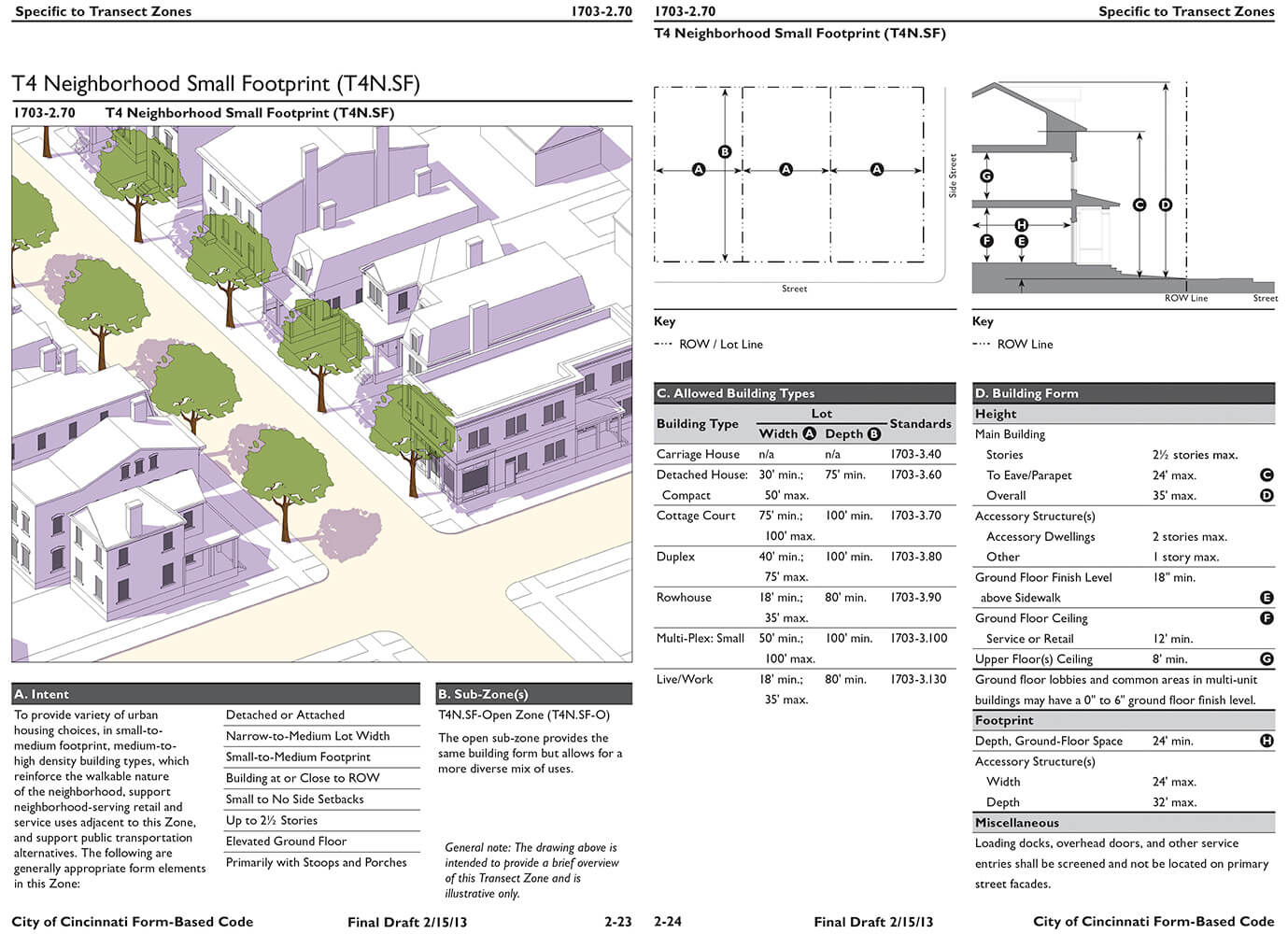 Regulating with building types and this fine-grained approach allows for more predictable built outcomes. For instance, on a 100′ by 100′ lot, an FBC can allow two fourplexes, or a cottage court with eight small, one-story units; but not a single, larger eight-unit apartment building.

For these reasons and more, Form-Based Coding is the most effective way to enable Missing Middle Housing.

“I want to thank you for your great work on Missing Middle Housing! It has been useful in my current research on policy reforms to support more affordable infill development in Victoria, B.C., and informing my report ‘Affordable Accessible Housing in a Dynamic City.’”

Or find out about our Form-Based Coding services

Next: The Types of Missing Middle Housing…

Invite Us to Speak